← Stop the Traffik- The Argument for Ethical Consumption.
Easter → 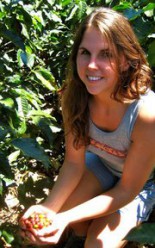 We have received a lot of positive feedback upon featuring a profile of Gloria Chonay, a fair trade artisan speaking at our April 27 event. In addition to Gloria, Courtney Lang will also be speaking. So, we have decided to profile her as well. Courtney has been indispensable to the Fair Trade Atlanta.

Courtney Lang works with Fair Trade Towns USA and is the national organizer. She has over 5 years of experience in community development, building both the Local Food and Fair Trade networks in Vermont.  As Local Food Coordinator with City Market/Onion River Cooperative, Courtney worked with local producers, institutions and consumers to increase market access and organize a strategic model for community action through farm tours, workshops, and local food challenges.  Like many in the Fair Trade industry, Courtney was inspired to take action in Fair Trade when she witnessed child-labor first hand in Costa Rica. As a founding member of Fair Trade Burlington, she has worked to build awareness of Fair Trade among Vermont residents.  She has  also worked with a Fair Trade USA licensee, Vermont Coffee Company, as Friend Ambassador where she united the story of Fair Trade to every purchase of coffee.

← Stop the Traffik- The Argument for Ethical Consumption.
Easter →